Every second the sun produces enough energy to sustain the earth’s needs for 500,000 years. But, why use it?

It's free and it's clean

Solar energy systems work by converting sunlight into power for your home. Sunlight is, of course, free, and solar energy systems work whenever the sun is in the sky, even if there is a layer of cloud cover. Solar energy can be used to power all your domestic devices, from an electric toothbrush to a widescreen TV. It also has virtually no impact on climate change, unlike other energy sources which often result in unwanted, harmful emissions.

Because solar power takes its energy from the sun, there's very little chance that the sun will cease being a source of energy – for the next one billion years at least. Other typical forms of energy, such as coal, gas and oil, will one day run out.

You get energy independence

By using solar energy, you will reduce your dependence on the utility companies. You will no longer need to have electricity delivered to your home as you will be able to produce your own solar power electricity.

It’s fair to say that many of the home improvements that you will make won’t add quite the equal value to your house as the money that you put into them. Solar energy, on the other hand, will save you money from your energy bill each month.

In addition, the investment that you make in solar, will add its exact property value–or more–to your home, should you decide to sell it later on.

Get solar. Get in touch with us now.

What is solar energy?

Solar energy is, simply, energy provided by the sun. This energy is in the form of solar radiation, which makes the production of solar electricity possible. In a single hour, the sun transmits more energy to the earth's surface than the world uses in a year.

Electricity can be produced directly from photovoltaic, PV, cells. PV panels are being used increasingly, both in the cities and in remote locations, to produce electricity for households, schools and communities, industries and even many ashrams in india today.

India is endowed with rich solar energy resource as we live near the equator. The average intensity of solar radiation received on India is 200 MW/km square (megawatt per kilometre square). With a geographical area of 3.287 million km square, this amounts to 657.4 million. 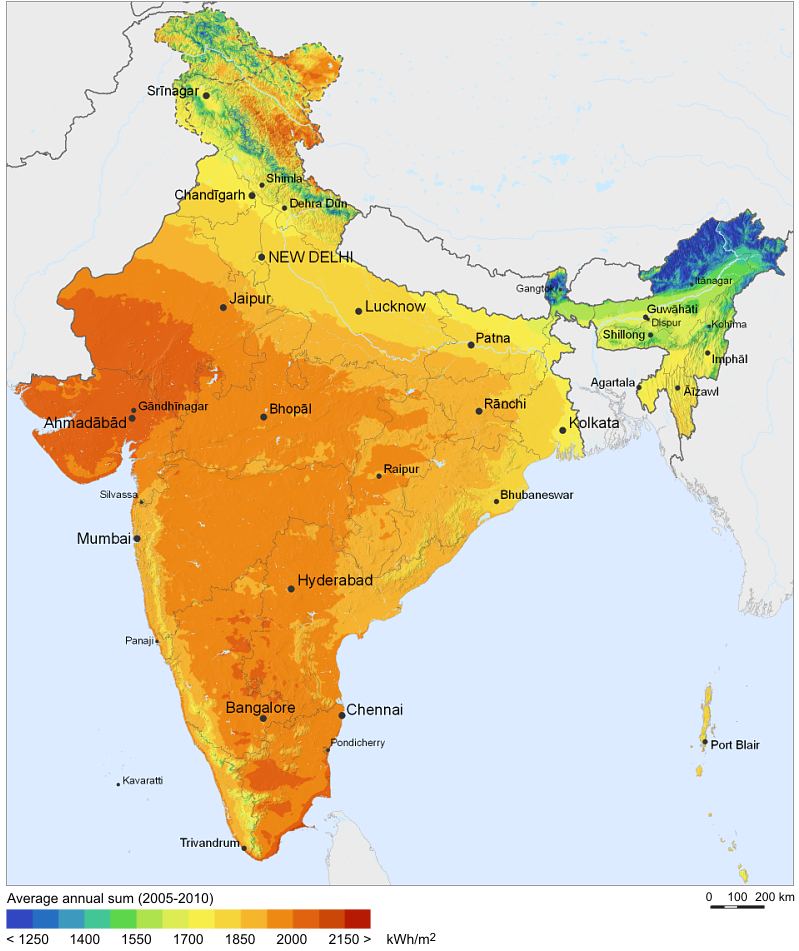 What are solar panels & how it works?

Solar panels capture the sunlight and convert it into electricity. And you don’t need to live somewhere warm and sunny, because solar needs only light not heat.It’s true that the more light the panels receive, the more electricity they can generate. But they still work on cloudy days – just as a solar-powered calculator does.Their full name is solar photovoltaic panels, or PV. (“Photo” means “light"  and “volts” means electricity.) 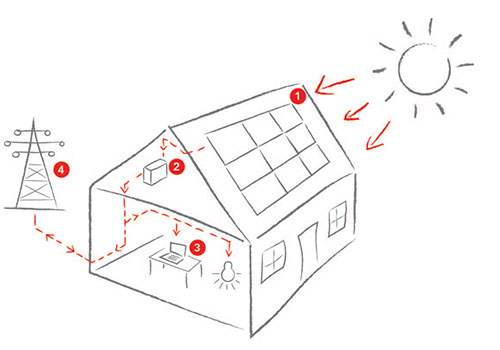 You’ve probably seen solar panels on roofs, or maybe on the ground. The panels are frames made up of solar PV cells.

1) The sun’s radiation hits these cells and is converted to direct current (DC) energy by the excitation of electrons in the PV cells.

2) This DC energy travels to an electrical device called an inverter, which converts DC energy into alternating current (AC) energy.

3) The AC electricity produced is just like the power supplied by your utility company, and can go directly to power things like computers and lights.

4) The power produced can be exported back to the mains national electricity grid and get redistributed around the country.

Get solar. Get in touch with us now.
TOP